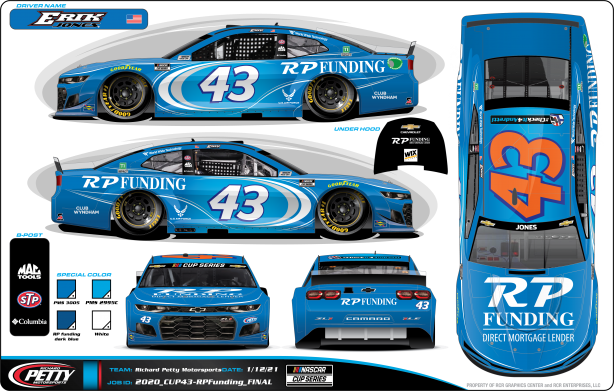 WELCOME, N.C. (February 1, 2021)—Richard Petty Motorsports (RPM) announced today a partnership with RP Funding, Florida’s No Closing Cost refinance lender. RP Funding will serve as the primary partner on the No. 43 Chevrolet Camaro ZL1 1LE driven by Erik Jones in the NASCAR Cup Series (NCS) Busch Clash At DAYTONA.  The Busch Clash at DAYTONA will open the 2021 NASCAR season under the lights on Tuesday, February 9, featuring an elite field of NASCAR Cup Series drivers on the iconic DAYTONA Road Course.

RP Funding has entered into a single-race partnership as the primary partner in the non-points exhibition race to help kick-start the brand’s involvement within NASCAR.

Through the partnership with Richard Petty Motorsports, Robert Palmer, president of RP Funding, aims to highlight that the Orlando-based company offers customers the best deal on a Florida mortgage with No Closing Cost Mortgages. As one of the fastest growing companies in Florida, RP Funding has paid over $40 million in Closing Costs for customers on their refinance. NASCAR fans can get a great deal on a refinance and will not pay Closing Costs with RP Funding.

“RP Funding is proud to partner with Richard Petty Motorsports and driver Erik Jones,” Palmer said. “Having the opportunity to display RP Funding in the Busch Clash will be highly beneficial to broaden our community awareness as Florida’s No Closing Cost refinance lender. We hope that NASCAR fans will call RP Funding for their mortgage needs in Florida.”

In contrast to the tightly packed competition on the Daytona (Fla.) International Speedway’s famed 2.5-mile high-banked-tri-oval, the reimagined Busch Clash at DAYTONA will utilize the track’s 14-turn, 3.61-mile road course for the 35 lap, 126.35 mile race. In the 43rd annual Busch Clash at DAYTONA, fading blue and white colors will adorn the No. 43 RP Funding Chevrolet Camaro ZL1 1LE.

“I am looking forward to the Clash at DAYTONA, and getting started for the first race of the year with a new team,” Jones said. “Obviously, getting to race on the road course will breakdown what our race cars are doing and, also help us to look ahead for the points race as well. I am excited to get to Florida with those guys and get to business. We are looking forward to having our new partner, RP Funding, on-board for that race as well. It will be pretty cool. I am excited to get to know those guys and have them on the car and hopefully go out and get a strong first run for them.”

Last year, in the longest Busch Clash at DAYTONA in the 42-year history of the race, Jones prevailed after three overtime attempts. By the time he crossed the finish line, there were only six remaining entries in the 18-car field. With the nose of his car held together with tape, Jones led the final lap to collect his first victory in the season-opening NASCAR Cup Series exhibition race. For Jones, it was his second victory at the Daytona International Speedway (2018).

RP Funding is the original “no fee” mortgage lender known across Florida for its No Closing Cost refinance. Since 2016 RP Funding has paid over $40 million in Closing Costs for its clients, saving them thousands. RP Funding is a Champion of the Community partner with the Orlando Magic as well as the primary sponsor for the Jacksonville Armada FC. For more information about our services visit www.rpfunding.com.

A performance and marketing driven company, Richard Petty Motorsports (RPM), co-owned by NASCAR Hall of Famer Richard Petty and successful business entrepreneur Andrew Murstein, is one of the most recognized brands in all of motorsports. RPM is the winningest team in NASCAR Cup Series history with 273 wins and has business partnerships with national and global leaders. Today the race operation fields the famed No. 43 in the NASCAR Cup Series with driver Erik Jones. The team is headquartered in Welcome, N.C.