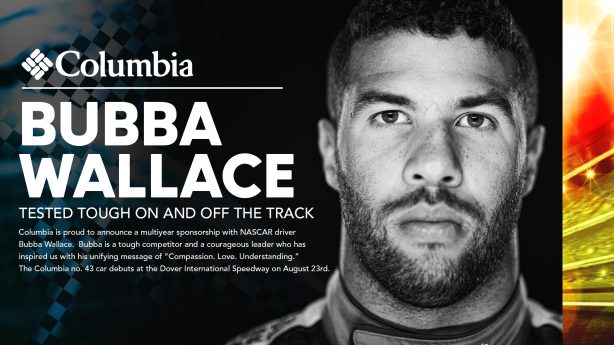 Columbia will leverage its first NASCAR driver and team sponsorship to promote its innovative product lines and proprietary technologies, including its PFG (Performance Fishing Gear) collection.

“There has always been a strong correlation between NASCAR and Columbia, especially with PFG,” said Joe Boyle, Columbia Brand President.  “We are excited by the opportunity to work with Bubba and Richard Petty Motorsports to engage our shared fans.”

“Columbia Sportswear is a perfect fit for my lifestyle away from the track,” said Bubba Wallace.  “I love spending time outdoors—boating, golfing, hiking, photography—just anything to help me decompress from a hectic racing schedule.  I’m beyond excited to be a part of the Columbia family and can’t wait to work with them on some unique content and fly their colors next weekend at Dover.”

A six-time NASCAR national series winner, Wallace was recently thrust into the national spotlight when his calls for NASCAR to ban the Confederate flag at all events was ultimately adopted.  He promotes a message of “compassion, love, understanding” with the intention of making racing more inclusive and ultimately broadening NASCAR’s reach.

“In addition to his racing talent, Bubba is a charismatic and courageous leader,” continued Boyle.  “It is his internal fortitude that most aligns with the Columbia brand and our Tested Tough ethos.  Bubba is a Tested Tough trailblazer and we are thrilled to be working with him.”

When he’s not racing at 200 MPH on the top tracks in the NASCAR circuit, Wallace can often be found outdoors hiking, fishing, mountain biking, playing golf, and shooting photos of amazing wilderness areas.  As part of this sponsorship, Columbia will be working closely with Bubba to further the brand’s efforts to unlock the outdoors for everyone.

The Columbia No. 43 Chevrolet Camaro will debut on August 23 at the NASCAR Cup Series Drydene 311 at the Dover (Del.) International Speedway.

Columbia, the flagship brand of Portland, Oregon-based Columbia Sportswear Company, has been creating innovative apparel, footwear, accessories and equipment for outdoor enthusiasts since 1938. Columbia has become a leading global brand by channeling the company’s passion for the outdoors and innovative spirit into technologies and performance products that keep people warm, dry, cool and protected year-round. To learn more, please visit the company’s website at www.columbia.com.

Wallace, a six-time NASCAR national series winner, first made news headlines in 2013 when he became the first Black driver in nearly 50 years to win a NASCAR national series race and again in 2018 when he joined the NASCAR Cup Series full-time with RPM. Off the track, Wallace has more Instagram followers than any other active NASCAR driver and is now one of the top drivers in licensed merchandise sales.