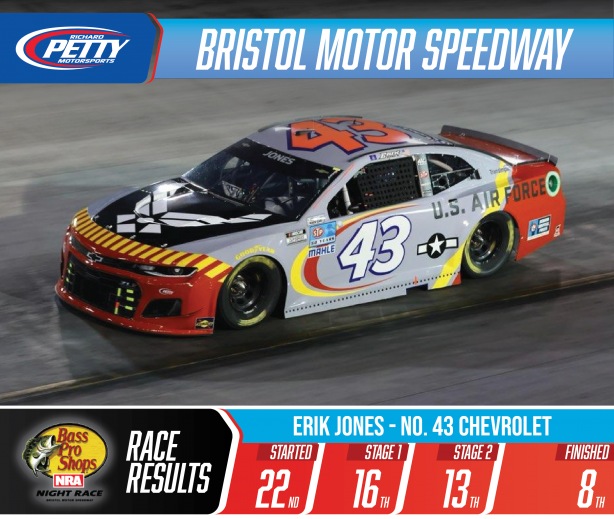 The lineup for the 500-lap event was determined by using NASCAR’s competition-based formula, which takes into account finishing positions from the previous race (weighted 25% owner and 25% driver, 21st-place Richmond), the ranking in team owner points (35%, 26th-place) and the fastest lap from the previous race (15%, Lap 12). Jones started at “The Last Great Colosseum” from the 22nd-place on Row 11.

At the end of Stage 1 on Lap 125, Jones was scored in the 16th-place. By the end of Stage 2 on Lap 250, he was in the 13th-place. The 25-year-old Byron, Michigan, native was scored as high as the second-place at the Bristol Motor Speedway in “Thunder Valley”. Jones posted his fourth top-ten finish of the 2021 NASCAR Cup Series season.

“It was a solid day for our No. 43 United States Air Force Chevrolet Camaro ZL1 1LE. I am glad our Richard Petty Motorsports team could get a top-10 run at Bristol (Motor Speedway) – we had some damage on the right-side and the balance was a bit tight to run further forward than we did. Proud of the effort and hope we can keep the good runs going.”