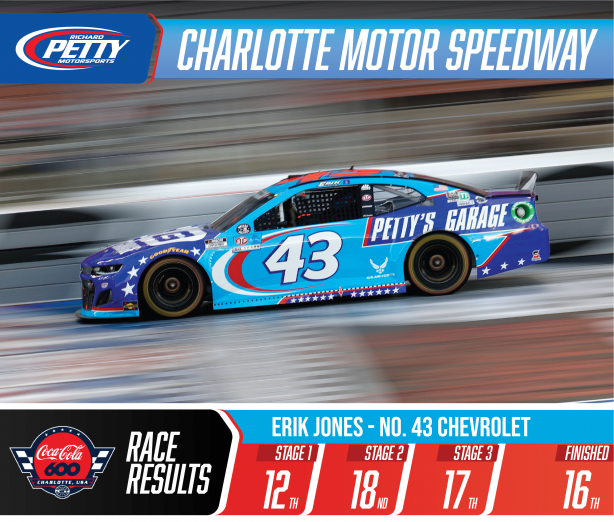 Erik Jones and the No. 43 Petty’s Garage Chevrolet Camaro ZL1 1LE team finished in the 16th-place in the NASCAR Cup Series (NCS) Coca-Cola 600 at the Charlotte (N.C.) Motor Speedway on Sunday, May 30.

The Memorial Day weekend’s Coca-Cola 600 is one of the most patriotic events in sports, honoring fallen soldiers who paid the ultimate sacrifice for their country in the 600 Miles of Remembrance. This weekend, Richard Petty Motorsports, Petty’s Garage, and Jones honored United States Air Force (USAF) Senior Master Sergeant (SMSgt) Rick Allen DeMorgan Jr.

Celebrating his birthday, Jones dealt with an ill-handling Chevrolet Camaro ZL1 1LE throughout much of the Coca-Cola 600. Over the course of nine pit stops, crew chief Jerry Baxter continuously tweaked the handling. Only a vibration stemming from the second-to-last set of tires, placed during a pit stop on Lap 302 under caution, thwarted a top-15 finish. Jones returned to pit road on Lap 320 after reporting the vibration.

The 25-year-old Byron, Michigan, native was scored as high as seventh-place at the Charlotte Motor Speedway.

“We had to come back in at the end, but we were able to fix the vibration. Our No. 43 Petty’s Garage Chevrolet Camaro ZL1 1LE was pretty decent all day. We had our best speed at the end of the race, we just got behind with the extra pit stop (Lap 320). It was a solid day – it was a better 1.5-mile track for us than we have had the last few races, so hopefully it is a step in the right direction for our Richard Petty Motorsports team.”