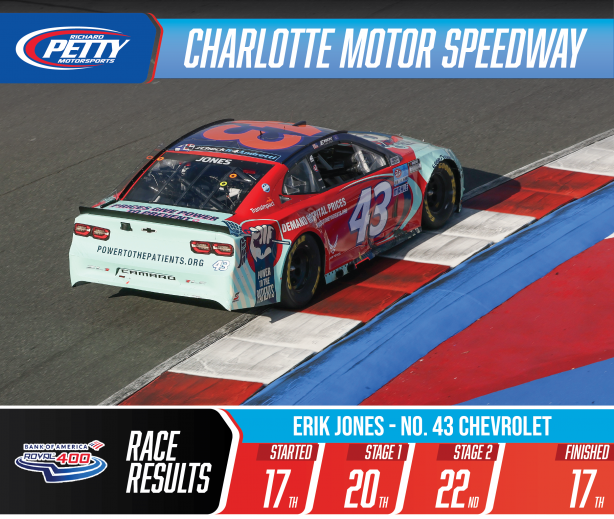 Erik Jones and the No. 43 Power to the Patients Chevrolet Camaro ZL1 1LE team finished in the 17th-place in the NASCAR Cup Series (NCS) Bank of America ROVAL™ 400 at the Charlotte (N.C.) Motor Speedway on Sunday, October 10.

The lineup for the scheduled 109-lap event was determined by using NASCAR’s competition-based formula, which takes into account finishing positions from the previous race (weighted 25% owner and 25% driver, ninth-place, Talladega), the ranking in team owner points (35%, 24th-place) and the fastest lap from the previous race (15%). Jones started the final race of the Round of 12 of the NASCAR Playoffs at the Charlotte Motor Speedway from the 17th-place on Row 9.

“It was a decent day for our No. 43 Power to the Patients Chevrolet Camaro ZL1 1LE team. Our Richard Petty Motorsports team had a few issues throughout the day at the Charlotte Motor Speedway, but we were able to fight back to the 17th-place. I thought we had better speed at times, but the race just didn’t play out the way we needed it to.”