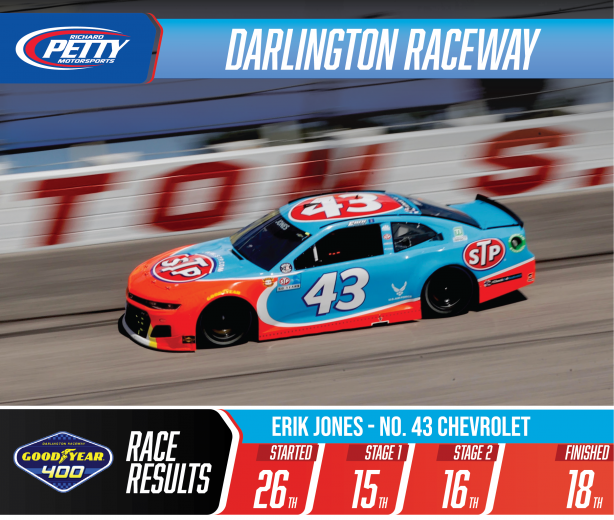 Erik Jones and the No. 43 STP Chevrolet Camaro ZL1 1LE team finished in the 18th-place in the NASCAR Cup Series (NCS) Goodyear 400 at the Darlington (S.C.) Raceway on Sunday, May 9.

Jones aimed to carry the momentum into the Goodyear 400 at the Darlington Raceway in a throwback paint scheme honoring John Andretti. Andretti collected the final win under the Petty Enterprises banner on April 18, 1999 at the Martinsville (Va.) Speedway in the same paint scheme. This weekend, the No. 43 STP Chevrolet Camaro ZL1 1LE won the Darlington Raceway Best in Show Throwback Paint Scheme Fan Vote.

The lineup for the 293-lap event was determined by using NASCAR’s competition-based formula, which takes into account finishing positions from the previous race (weighted 25% owner and 25% driver, 25th-place Kansas), the ranking in team owner points (35%, 27th-place) and the fastest lap from the previous race (15%). Jones started at “The Lady in Black,” located in Darlington, S.C., from the 26th-place on Row 13.

When it comes to Darlington Raceway, earning a “Darlington Stripe” is a rite of passage at the “Track Too Tough to Tame.” After running in the top 15 for 102 laps, Jones earned his Darlington Stripe on Lap 202 while in the 16th-place.

The 24-year-old Byron, Michigan, native was scored as high as fourth place at the Darlington Raceway.

“We did not get the finish we wanted today with our Richard Petty Motorsports No. 43 STP Camaro ZL1 1LE. It was pretty decent. We had a good run early and lost the balance a little bit late, and then cut a tire and got in the fence. We came back and salvaged a decent day, so I am happy with that. It was the best run we have had in a few weeks, and it is something to build off of when we come back in the fall. Overall a decent day, but we can do a little bit better.”