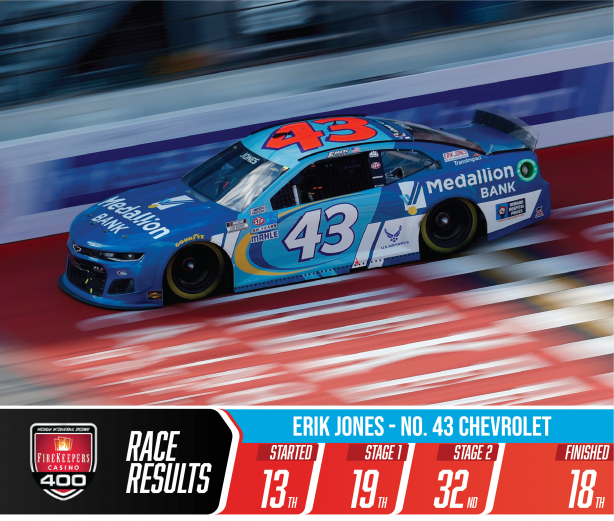 Erik Jones and the No. 43 Medallion Bank Chevrolet Camaro ZL1 1LE team finished in the 18th-place in the NASCAR Cup Series (NCS) FireKeepers Casino 400 at the Michigan International Speedway, located in Brooklyn, on Sunday, August 22.

The lineup for the 200-lap event was determined by using NASCAR’s competition-based formula, which takes into account finishing positions from the previous race (weighted 25% owner and 25% driver, seventh-place, Indy), the ranking in team owner points (35%, 25th-place) and the fastest lap from the previous race (15%). Jones started the event at the Michigan International Speedway, nestled in the lush Irish Hills of Southeastern Michigan, from the 13th-place on Row 7.

“It ended up being an okay day for our Richard Petty Motorsports team. It was just up and down. We got caught a lap down early with a loose wheel. In the middle part of the race, there just was not much going on. We were tight all day and could not really get it to do much other than that. It was good to get back on the lead lap and at least salvage a top-20 finish out of our No. 43 Medallion Bank Chevrolet Camaro ZL1 1LE. We will go on and see what we can learn from it.

“Hopefully, we will go to Daytona (International Speedway) and get a win.”

On Sunday afternoon, Jones announced a contract extension with Richard Petty Motorsports, meaning he will continue to drive the No. 43 Chevrolet Camaro ZL1 1LE in the NASCAR Cup Series in 2022.

“I can officially announce that we have put pen to paper, and that I’ll be back in the No. 43 next year. That was literally done yesterday while I was out doing some stuff. It’s cool to have it done. I’m just happy to have it done at this point in the season, and to be able to focus not only on the rest of this year, but also to be able to work on getting next year settled in with a new car and everything going on there. So yeah, I’m happy we can finally say it and get it out there. We’ve been really close on everything the last couple of weeks and just finished everything up.”