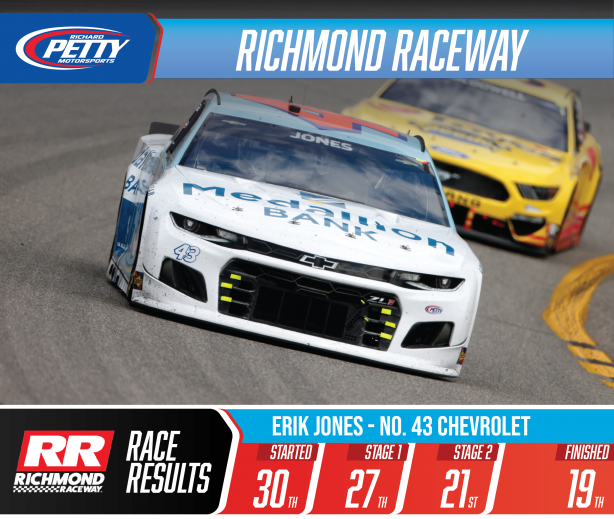 Erik Jones and the No. 43 Medallion Bank Chevrolet Camaro ZL1 1LE team finished in the 19th-place in the NASCAR Cup Series (NCS) Toyota Owners 400 at the Richmond (Va.) Raceway on Sunday, April 18.

The lineup for the 400-lap event was determined by using NASCAR’s competition-based formula, which takes into account finishing positions from the previous race (weighted 25% owner and 25% driver, 30th-place Martinsville), the ranking in team owner points (35%, 26th-place) and the fastest lap from the previous race (15%). Jones started the event at the .75-mile oval from the 30th-place on Row 15.

Only 14 of the 38 drivers in the Toyota Owners 400 finished on the lead lap; Jones finished two laps down.

The 24-year-old Byron, Michigan, native was scored as high as the ninth-place at the Richmond Raceway.

“It was an up-and-down day for the No. 43 Medallion Bank Chevrolet Camaro ZL1 1LE. We started too tight and could not really do what we needed to do with our Chevrolet Camaro. We got it better as the day went, especially towards the end of the race. We started to really get some good speed and gain some track position. Just got too far behind, got caught on pit road when the caution flag came out, lost a lap early and could not get it back where we needed it to be. We will take a top-20 finish. We got some good notes and we will move on.”