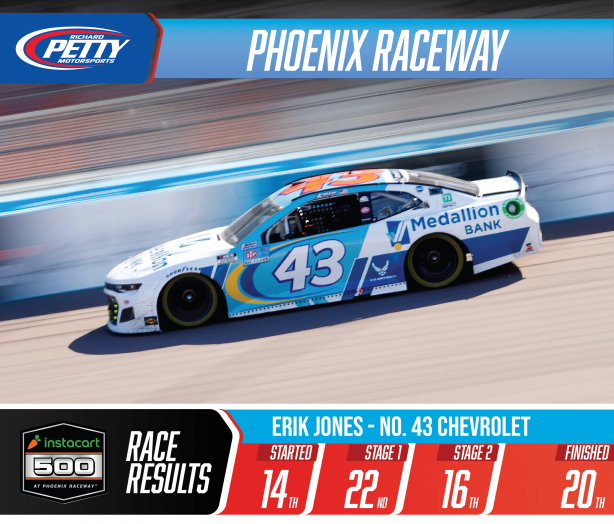 Erik Jones and the No. 43 Medallion Bank Chevrolet Camaro ZL1 1LE team finished in the 20th-place in the NASCAR Cup Series (NCS) Instacart 500 at the Phoenix (Ariz.) Raceway on Sunday, March 14.

The lineup for the 312-lap event was determined by using NASCAR’s competition-based formula, which takes into account finishing positions from the previous race (weighted 25% owner and 25% driver, 10th-place Las Vegas Motor Speedway), the ranking in team owner points (35%, 25th-place) and the fastest lap from the previous race (15%). Jones started the event at the one-mile track in Avondale, Ariz., from the 14th-place on Row 7.

The 24-year-old Byron, Michigan, native was scored as high as the eighth-place at the Phoenix Raceway.

“It was not exactly the day our team was hoping for with the No. 43 Medallion Bank Chevrolet Camaro ZL1 1LE, but there are some good things we can take from it. I thought our early and mid-run speed, especially earlier in the race, was pretty good. We were a top-15 Chevrolet Camaro ZL1 1LE. Then we lost the balance towards the end and ended-up slipping back and finishing in the 20th-place. So, it was not 100 percent what we wanted, but for a short track, it was a good day to build, learn and try to get better for the next one. We had good pit stops all day. We were pretty quick on pit road picking-up spots, so there are a lot of positives to take and move forward.”