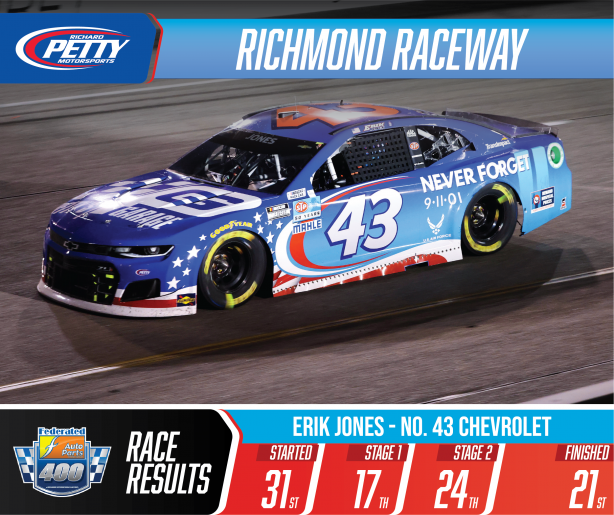 The lineup for the 400-lap event was determined by using NASCAR’s competition-based formula, which takes into account finishing positions from the previous race (weighted 25% owner and 25% driver, 32nd-place Darlington), the ranking in team owner points (35%, 27th-place) and the fastest lap from the previous race (15%). Jones started at “The Action Track,” located in Richmond, Va., from the 31st-place on Row 16.

In a patriotic paint scheme honoring Joseph Vigiano, John Vigiano II, and Lt. Peter C. Martin, Richard Petty Motorsports and Jones remembered all those perished on September 11, 2001 and honored the first responders. These heroes were selected to be honored on the No. 43 Petty’s Garage Chevrolet Camaro ZL1 1LE because items of theirs were given to Richard Petty directly, to be displayed in the Petty Museum. John T. Vigiano II was a firefighter and Joseph Vincent Vigiano was an NYPD detective. Their father, John Vigiano Sr., a retired FDNY captain, sent items of his sons to Richard Petty.

“It was a decent day for our team in the No. 43 Petty’s Garage Chevrolet Camaro ZL1 1LE. It was cool to have a special 9/11 remembrance paint scheme on the Richard Petty Motorsports Chevrolet. We lost the balance in the middle-part of the race and got a bit behind and could not make it up from there.

“I am looking forward to the Bristol (Motor Speedway) next week – it is my favorite place to go.”