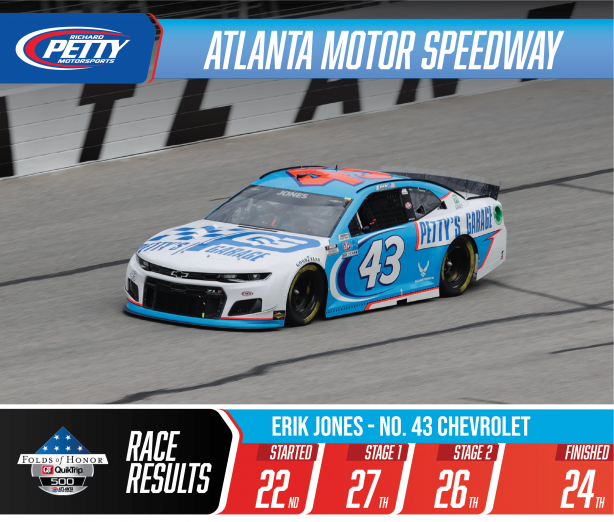 Erik Jones and the No. 43 Petty’s Garage Chevrolet Camaro ZL1 1LE team finished in the 24th-place in the NASCAR Cup Series (NCS) Folds of Honor Quiktrip 500 at the Atlanta (Ga.) Motor Speedway on Sunday, March 21.

The lineup for the 325-lap event was determined by using NASCAR’s competition-based formula, which takes into account finishing positions from the previous race (weighted 25% owner and 25% driver, 20th-place Phoenix Raceway), the ranking in team owner points (35%, 23rd-place) and the fastest lap from the previous race (15%). Jones started the event at the 1.54-mile(s) track in Hampton, Ga., from the 22nd-place on Row 11.

The 24-year-old Byron, Michigan, native was scored as high as the 18th-place.

“It was just not a great day for our No. 43 Petty’s Garage Chevrolet Camaro ZL1 1LE team. We struggled with speed for the most part, and never got much better. Our team will learn from it and we will focus on the Bristol Motor Speedway for next weekend.”