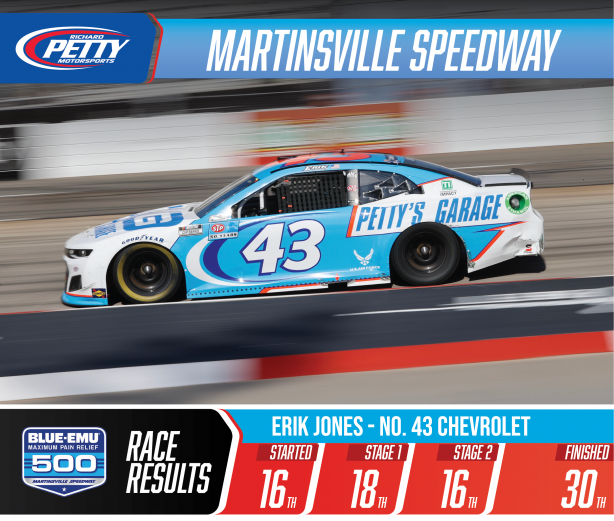 Erik Jones and the No. 43 Petty’s Garage Chevrolet Camaro ZL1 1LE team finished in the 30th-place in the NASCAR Cup Series (NCS) Blue-Emu Maximum Relief 500 at the Martinsville (Va.) Speedway on Sunday, April 11.

The lineup for the 500-lap event was determined by using NASCAR’s competition-based formula, which takes into account finishing positions from the previous race (weighted 25% owner and 25% driver, ninth-place Bristol Motor Speedway), the ranking in team owner points (35%, 22nd-place) and the fastest lap from the previous race (15%). Jones started the event at the 0.526-mile paper-clip-shaped oval of the Martinsville Speedway from the 16th-place on Row 8.

Due to inclement weather on Saturday, April 10, the Blue-Emu Maximum Relief 500 at the Martinsville Speedway was red-flagged after 42 laps completed. The remainder of the short track battle was postponed to Sunday.

“It was not the day we wanted for the No. 43 Petty’s Garage Chevrolet Camaro ZL1 1LE. It was up and down trying to find a balance to get our Chevrolet Camaro where it could roll the center and not be too free. I finally felt we got the car where we wanted to be towards the end. Then we had those string of cautions and got caught up in an incident. We did not have too much damage, but we had either an axle or a gear issue that ended our day. I wish we could have seen where we would have ended up. I think we probably could have driven up towards the top-15 in the running order – maybe back of the top-10. We learned a lot though, and I think we can take it to the race coming back to the Martinsville Speedway in the fall.”