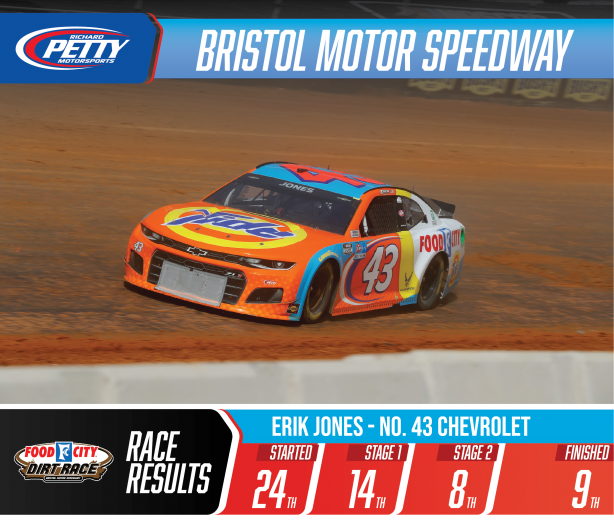 NASCAR made the decision to cancel the qualifying races on Saturday, March 27, that were originally intended to set the field at the half-mile. After inclement weather canceled qualifying, the lineup for the 250-lap event was determined by using NASCAR’s competition-based formula, which takes into account finishing positions from the previous race (weighted 25% owner and 25% driver, 24th-place Atlanta Motor Speedway), the ranking in team owner points (35%, 25th-place) and the fastest lap from the previous race (15%). Jones started the event at the half-mile track in Bristol, Tenn., from the 24th-place on Row 12.

The event marked the first time the NASCAR Cup Series competed on dirt in the sport’s modern era.

The 24-year-old Byron, Michigan, native was scored as high as the eighth-place at the Bristol Motor Speedway, where the high-banked concrete oval was transformed into a state-of-the-art dirt racing facility. Jones posted his second top-ten finish of the 2021 NASCAR Cup Series season.

“It was a good day for our No. 43 Tide Chevrolet Camaro ZL1 1LE at the Bristol Motor Speedway. We started a little bit further back in the lineup, and worked our way towards the top-10. Our Richard Petty Motorsports team ended up getting some good stage points throughout the day (Stage 2, eighth-place) and ended up coming home in the ninth place. It was a solid day. What we were looking for today was getting back towards the top 10, and I think our Chevrolet Camaro was probably a little bit better than that. We just kind of ran out of laps and ran out of time the way the race was sectioned out.

“We got some good notes. We are going to do this again in the future, so hopefully we can take something we learned from today, move forward with it and bring it back next time.”