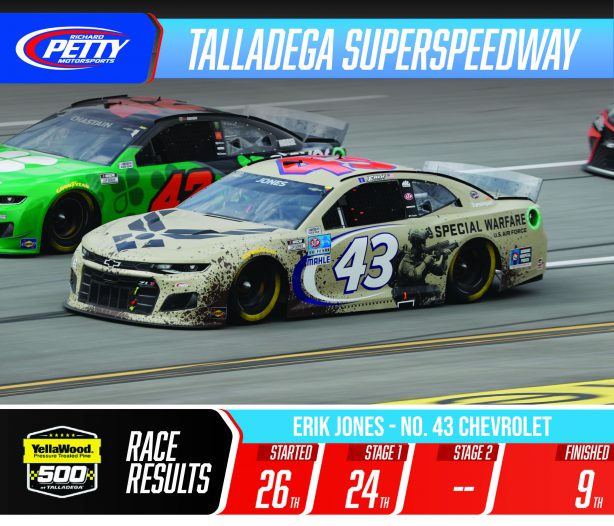 Erik Jones and the No. 43 United States Air Force (USAF) Chevrolet Camaro ZL1 1LE team finished in the ninth-place in the NASCAR Cup Series (NCS) YellaWood 500 at the Talladega (Ala.) Superspeedway on Monday, October 4.

The NASCAR Cup Series Round of 12 playoff race at the 2.66-mile Alabama track was postponed due to inclement weather on Sunday, October 3.

The lineup for the scheduled 188-lap event was determined by using NASCAR’s competition-based formula, which takes into account finishing positions from the previous race (weighted 25% owner and 25% driver, 26th-place, Las Vegas), the ranking in team owner points (35%, 26th-place) and the fastest lap from the previous race (15%, Lap 17). Jones started at the Talladega Superspeedway, the 31st NASCAR Cup Series points event of the season, from the 26th-place on Row 13.

At the end of Stage 1 on Lap 60, Jones was scored in the 24th-place. The 25-year-old Byron, Michigan, native was scored as high as the first-place at the Talladega Superspeedway. The YellaWood 500 was stopped 71 laps shy of the full distance by the second rain shower of the day, when the caution-flag was waved for a multi-car incident, and the track went under red flag-conditions with three laps remaining in Stage 2. Since more than half of the scheduled 188 laps were completed, NASCAR rules state the standings were scored as the official finishing order.

“It was a good day for the No. 43 United States Air Force Chevrolet Camaro ZL1 1LE team. I thought our team had good speed all day and we kept it up front. The race was coming to us, and then the rain came. I am proud of the effort to have a top-ten finish and, hopefully, we keep it rolling for the Bank of America ROVAL™ 400 in Charlotte.”