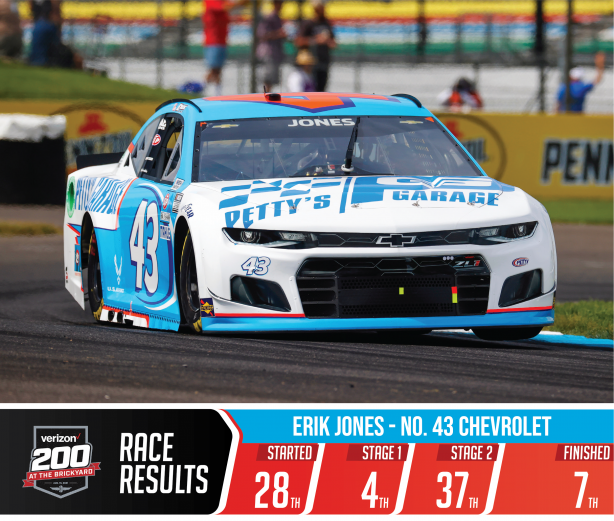 Erik Jones and the No. 43 Petty’s Garage Chevrolet Camaro ZL1 1LE finished in the seventh-place in the NASCAR Cup Series (NCS) Verizon 200 at the Brickyard on Sunday, August 15.

NASCAR utilized a two-round qualifying session to set the lineup for the Verizon 200 at the Brickyard in the seventh qualifying session of the season. Jones turned a lap of 89.318 seconds at 98.305 mph around the Indianapolis (Ind.) Motor Speedway Sunday morning, setting the 28th-fastest lap in qualifying.

The Verizon 200 at the Brickyard marked the first time the NASCAR Cup Series raced on the 2.439-mile Indianapolis Motor Speedway road course located in Speedway. At the end of Stage 1 on Lap 15, he was in the fourth-place, earning seven stage points. By the end of Stage 2 on Lap 35, Jones was scored in the 37th-place. On Lap 55 under green-flag conditions, the No. 43 Petty’s Garage Chevrolet Camaro ZL1 1LE visited pit road for four tires, and fuel. After the curbing in Turn 6 created havoc for the field on Lap 78, Jones spun due to oil on the track. The yellow flag was waved followed by the red flag while a safety crew removed the remaining parts of the curbing. In overtime, Jones rallied from mayhem of the second attempt at a restart to score a season best finish for Richard Petty Motorsports to date.

The 25-year-old Byron, Michigan, native was scored as high as the fourth-place at the Indianapolis Motor Speedway road course.

“It was a major day of attrition for the No. 43 Petty’s Garage Chevrolet Camaro ZL1 1LE. We did not really have the Chevrolet we needed, but stuck with it all day. Things played-out for our Richard Petty Motorsports team – some guys were getting into wrecks, getting in trouble and making a lot of crazy moves. We just stuck through it and stayed on the straight-and-narrow and kept our car fairly clean and came home with a seventh-place finish. We will take a top-10 finish any day.