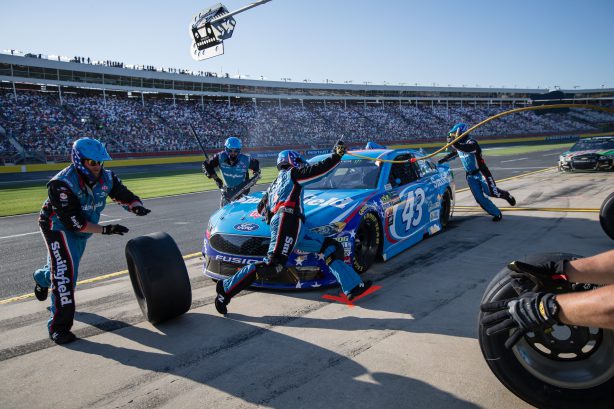 Smithfield Returns to No. 43 Ford to at the Monster Mile

Regan Smith, who filled in for the injured Aric Almirola at Charlotte Motor Speedway, will once again pilot the No. 43 Smithfield Ford this weekend at Dover International Speedway. Smith drove to a fourth-place finish in the Monster Energy Open and raced as high as 12th before finishing 22nd in the Coca-Cola 600. Smith will work to tame the Monster Mile this weekend in his 12th Monster Energy NASCAR Cup Series start.

Smith knows his way to Victory Lane at Dover. He scored a win in the NASCAR XFINITY Series race in 2015. He also has two Top-Five and five Top-10 finishes in the series at the mile track in 13 starts. In his 12 Monster Energy Series starts, he has a best start of 11th and finish of 17th.

Smith will join fellow drivers Kyle Busch, Matt Kenseth and Paul Menard for a Youth Autograph Session on Sunday, June 4. Dover International Speedway will distribute 125 wristbands to kids 12 and younger. Don’t forget kids 12 and under are FREE for all XFINITY Series and Camping World Truck Series races. Youth tickets also are available for the Monster Energy NASCAR Cup Series event at Dover for just $10. Learn more about free and discounted tickets for kids at NASCAR.com/KidsTix.

Richard Petty will celebrate his 80th birthday with fans at Dover on Sunday. Riki Rachtman and Mike Bagley will host the Q&A in celebration of #KINGs80th. Petty will also receive a special, custom birthday cake made to replicate the same 1969 Ford that he drove to victory lane in the first Monster Energy NASCAR Cup Series race at the Monster Mile, the “Mason-Dixon 300” on July 6, 1969.

Just before the green flag waves on Sunday’s “AAA 400 Drive for Autism”, Petty will drive a street-ready, No. 43 1970 Plymouth Road Runner Superbird tribute car around the track as part of the pre-race ceremonies.

“I keep saying it, but I’m honored to drive the No. 43 Ford for Richard (Petty) and his team. I think we learned a lot at Charlotte and work together well. I’m looking forward to this weekend. I really like Dover. My last win in NASCAR was at Dover, so I’m really looking forward to getting back there in the Monster Energy Series this weekend. The No. 43 team has some good runs at Dover in the last few years, so hopefully, we can tame the Monster and get a solid finish.”

A performance and marketing driven company, Richard Petty Motorsports, co-owned by NASCAR Hall of Famer Richard Petty and successful business entrepreneur Andrew Murstein, is one of the most recognized brands in all of motorsports. With a history of over 200 wins and business partnerships with national and global leaders, today the race operation fields one team in competition in the NASCAR premier series with driver Aric Almirola. Almirola will return to the iconic No. 43 Ford with partners Smithfield Foods, STP, United States Air Force and Fresh From Florida. The team is headquartered in Mooresville, N.C.