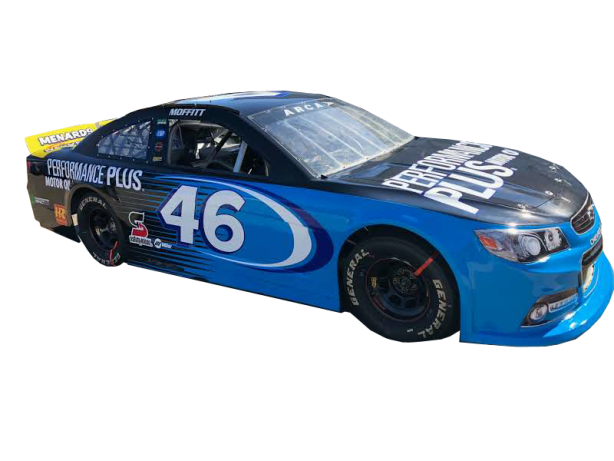 Kyle Petty made his ARCA Racing Series debut in 1979 at the Daytona International Speedway, winning the race in his first stock car start. Now, 40 years later, his nephew, Thad Moffitt, will look to do the same driving the No. 46 Performance Plus Motor Oil Chevrolet in a car prepared by Empire Racing Group (ERG).

Moffitt will make the first Daytona start in his young career with his partner Performance Plus, who has sponsored him in his previous ARCA starts.

Moffitt, the 18-year-old grandson of “The King” Richard Petty, recently participated in the ARCA Racing Series test at Daytona in his No. 46 Chevrolet. He went through the same test last year but was too young to compete in the race.

With eight ARCA starts behind him, Moffitt is ready to compete on the big tracks and race at the track his family helped make famous.

“This is Daytona, and it means so much to my family,” said Moffitt. “Testing last year just gave me that desire to race here. I know what Uncle Kyle did in his first ARCA start here – he won the race. It would be amazing to accomplish that same feat 40 years later. We had a good test session and I have more experience in the draft, too. I’m ready to go and look forward to that green flag coming down.”

Being a part of the Petty family, Moffitt has been traveling to Daytona Beach since he was born. The track and its history are nothing new, and Moffitt is not intimidated by the opportunity.

“Growing up, I went to Daytona every February and July,” Moffitt said. “I loved watching the ‘43’ race and watching Uncle Kyle. It’s cool to finally have my turn. Daytona is a big part of our family history. It started with my great grandfather, Lee, and has been passed down. It feels like a rite of passage to race at Daytona. I’m ready to start our race season in February.”

Moffitt and his No. 46 Chevrolet Empire Racing team had immediate success in ARCA competition on the short tracks. He’s finished in the Top 15 in three of his eight starts, including a Top 10 finish. The team will make select starts in the ARCA Racing Series with Performance Plus throughout 2019.

“The support of Performance Plus has given me so many opportunities in my career,” said Moffitt. “It allowed me to race late models and then jump into the ARCA Racing Series. It’s perfect that they’re supporting me at Daytona. The car is going through final prep now and getting decaled. It’s always a great looking car.”

Moffitt’s No. 46 Chevrolet is not only supported by Performance Plus, but also will have continued associate sponsorship from Alsco, Apple Spice, Fence Armor, Hostetler Ranch and Transportation Impact.

A native of Trinity, N.C., Moffitt is the son of Brian and Rebecca Petty-Moffitt. He started racing a go-kart and a quarter midget before moving to a Limited Late Model and now the ARCA Racing Series. Moffitt grew up going to the track with his grandfather Richard Petty and watching his Uncle Kyle race.

Performance Plus is a premium brand of lubricants that provide superior quality and unmatched performance at a competitive price. Produced and distributed by Safety-Kleen, a subsidiary of Clean Harbors (NYSE: CLH), Performance Plus products use conventionally refined oils and proprietary twice-refined oils, blended with industry-leading additives, to meet and exceed industry certifications, licenses, approvals and OEM warranty requirements. With more than 30 years of innovation, research and testing, Performance Plus formulations are relied on by some of the largest commercial fleets and U.S. military combat vehicles, as well as race teams at events across North America. Visit PerformancePlusOils.com.

A performance and marketing driven company, Richard Petty Motorsports (RPM), co-owned by NASCAR Hall of Famer Richard Petty and successful business entrepreneur Andrew Murstein, is one of the most recognized brands in all of motorsports. RPM is the winningest team in NASCAR Cup history with 273 wins and has business partnerships with national and global leaders.  Today the race operation fields the famed No. 43 in the Monster Energy NASCAR Cup Series with driver Darrell “Bubba” Wallace Jr. The team is headquartered in Welcome, N.C. and is supported by primary partners United States Air Force and World Wide Technology.

Empire Racing Group (ERG) is a development team that strives to identify young racing talent and assist them in the advancement of their careers. While ERG originally focused on the ARCA Racing Series with driver Sean Corr (team owner/driver), the team has since expanded its reach into other series thanks in part to its alliance with Grumpy’s Performance, Inc. Under the expertise of Grumpy’s Performances’ VP, and Competition Director, Mike ‘Grumpy’ Cheek, ERG now competes in various late model series as well as the NASCAR Gander Outdoor Truck Series (NGOTS). Since 2016, ERG has been serving as the development team for Richard Petty Motorsports, providing young drivers with driver coaching, technical support, public relations, and marketing needs. Drivers for the upcoming season include notable rising stars Thad Moffitt, and Harrison Moffitt, as well as racing veteran Sean Corr.